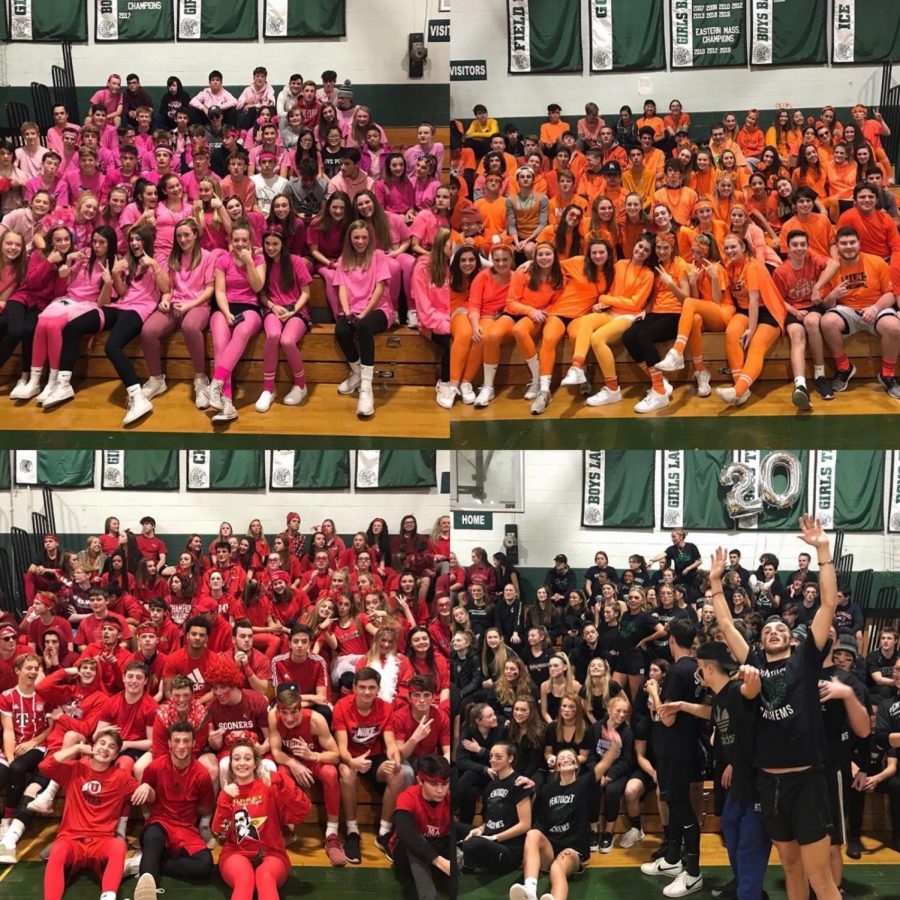 Picture this: the beginning of March came rolling around and Pentucket Regional High School’s halls were swimming with exciting gossip about the upcoming Sadie Hawkins dance, an indoor track nationals meet, spring sports, and various other exciting social events.

The week of Friday the 13th arrived and worries about date postponements due to coronavirus replaced and diminished  the students’ excitement and everything they had been looking forward to for the upcoming weeks.

Fast forwarding to the present: it is clear that COVID-19 has become one of the most devastating events of students’ lives. Massachusetts schools have been shut down for the remainder of the school year, and it has been made very clear that Pentucket’s spring events will not be able to go on like had once been hoped. Here are some of the Pentucket happenings that have been canceled due to COVID-19:
Sadie Hawkins Dance
Pentucket’s student government had been working hard on the school’s next dance and were selling tickets in the days leading up to the dance. Sadie was announced back in January and was planned to be held on March 13.

Meetings were held and decisions were battled over, as no one wanted to cancel the dance, but for health and sanitary reasons, the student government had to postpone and then finally cancel the Sadie Hawkins dance.

Sophomore Class President Brian Inger helped plan the dance and spread excitement to students throughout the whole school. Inger said that cancelling the dance “wasn’t what any of us really wanted after all the hard work we had put in […] While I wasn’t happy with the decision, I understood the importance of it, and that it was in the best interest of students and staff.”
Indoor Track Nationals Meet
Five superstar athletes from the Pentucket girls’ track team secured their spots at the New Balance Nationals Indoor Track Meet, which planned to take place in March. Senior Madi Krohto, Junior Syeria Campbell, Sophomore Emily Rubio, and Freshmen Sabrina Campbell and Sage Smith were ecstatic that they had the chance to race with the best in the country and could not wait to go.

The girls were packing their bags to travel to New York City for the meet, but they were met with upsetting news just two days before their departure. The athletes received a call that the nationals meet would be canceled due to the coronavirus outbreak. The five could not believe the sudden defeat that had been brought upon them.

Athletes pushing themselves harder than ever over the winter season to make it to nationals felt as if their dedication and hard work had been for nothing. Every athlete’s goal is to make it as far as possible and be nationally recognized, but for Pentucket’s runners, their chances at titles were ripped away.
Student Council’s “Mr. Pentucket” Pageant
Pentucket’s Student Council was planning a new event for the community that would bring students together for a fun time. A talent pageant was going to be held for Pentucket senior boys where the community would come to watch and support their friends.

The show was in the making for months and was finally ready to be held in the middle of March. The group had worked hard to organize and perfect all of the show’s happenings. However, it has been made clear that the pageant will not be happening for the 2019-20 school year, seeing that students will remain home from school until next September.

Student Council Co-president Cassie Plisinski was head of the event and said that when she heard the event was canceled, she was “undoubtedly disappointed.” Her team considered hosting the event online during quarantine, but “if [the student body] wants Mr. Pentucket to become a memorable yearly event, it needs the high energy of Spirit Week, something we felt couldn’t be replicated online.” She also hopes “that the 2020-21 Student Council will continue planning this event and hold it next year,” adding, “it has so much potential to be a new Pentucket tradition.”
Spring Sports
Before school was closed for the year, students were hoping they could salvage however many meets and games they could with the May 5 start date. But now, no one will get even the slightest taste of the fun and glory that Pentucket sports offers students.

Seniors are taking the hardest hit with this cancellation, seeing that their last seasons as Pentucket Sachems would have certainly been their most successful and meaningful. Seniors who are playing sports in college are now concerned that when the collegiatef seasons begin, they will be out of shape and not in the right headspace to continue their sports.

Of course, all grades are affected and this is upsetting for all. Freshmen will not get their debut season, sophomores will lose out on a crucial developmental year, and juniors will miss many college scouting opportunities.
Prom
Having been in anticipation for months, students have bought outfits and made plans for prom months ahead of time, their excitement fueling the whole process. However, the magic of this special end of year event has vanished and there is no real way to recreate this experience for Pentucket students.

Upperclassmen are extremely disappointed that they will not get to dress up, take pictures, and have a fun time with their friends. Juniors will not get their first prom, nor will seniors get their last. While students are disappointed they will not get to walk down promenade or celebrate the year coming to a close, Pentucket students have been greatly understanding that these event cancellations are for the greater good.
Graduation
It seems surreal that Pentucket seniors will not get to walk up on stage and receive their high school diplomas, a moment they have surely imagined ever since they were freshmen.

While a physical graduation ceremony will not take place, the Pentucket community has plans for some kind of a virtual demonstration to honor and congratulate the Class of 2020. The Pentucket senior class has also taken it upon themselves to create a bit of a celebration and show of success on their Instagram page. In lieu of Guidance’s windows full of committed college posters, the seniors are posting their fellow classmates’ school pictures, colleges they are going to, and their majors.

It is heartwarming that the Class of 2020 has not given up hope due to the COVID-19 cancellations, but they are rather taking this as an opportunity to get creative to share their favorite Pentucket memories and their plans for the future.