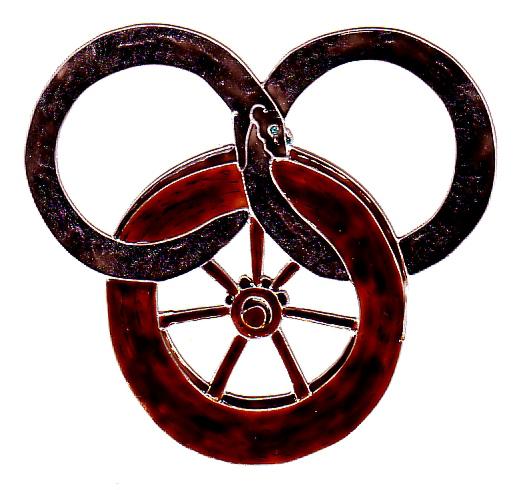 “The Wheel of Time turns and Ages come and go, leaving memories that become legend. Legend fades to myth, and even myth is long forgotten when the Age that gave it birth returns again. In the Third Age, an Age of Prophecy, the World and Time themselves hang in the balance. What was, what will be, and what is may yet fall under the Shadow.”

has something to the effect of the above quote on the backs of his books. The above quote was the back cover to the first book in the series, The Eye of the World.

The book series follows three people who are capable of weaving a wheel of destiny around themselves. It’s not as confusing as it sounds, and frankly, it’s sort of a McGuffin (a plot device that is pursued with almost no explanation to why it is important.) The three main characters are Rand al’Thor, the Dragon Reborn, destined to defeat the Dark One, Matrim Cauthon, manipulator of luck, and Perrin Aybara, the man his wolf pack calls Young Bull.

Imagine taking the world J.R.R Tolkien created, stripping it to the bare essence of what Middle Earth is, and building from there. That is what the nameless world the series takes place in is like. It has a great Middle Earth vibe to it, but it creates its own twist on everything. The Mines of Moria becomes Shayol Ghul, while the city of Gondor becomes the City of Caemlyn.

In some ways, the books are better than the Lord of the Rings, because the cultures are varied more than Tolkien had in his works. No creatures are the products of fairy tales, but they do share similarities. Almost everyone is a human, aside from a few ent-like creatures such as Ogier or Orc replacements called Trollocs.

Another thing the series does better than Lord of the Rings is its portrayal of women. When reading Lord of the Rings, women have little to zero affect on the story, aside from moral support in the form of Arwen. The Wheel of Time has a plethora of thousands of characters, many of them women. They’re written as human and, unlike several fantasy women, they’re more than just “the tough chick” and “the healer with the knife.” The wizards of this world are women only, known as the Aes Sedai.

The one complaint about the fourteen book series is that it takes a noticeable drop for the worse in books seven through eleven. With each book clocking out at about one thousand pages, the middle books may as well be “Rand brushes his teeth for fifty pages.” The first thing that comes to mind thinking of the middle books is how Robert Jordan wasted an entire scene on one of his characters bathing. That was it. Nothing else.

Sadly, Robert Jordan died of cardiovascular disease after his eleventh book, The Knife of Dreams. This is the books where most of the subplots come together and a coherent story is formed from books eleven to fourteen. When Jordan died, fantasy giant Brandon Sanderson was hired to finish Jordan’s legacy. Many hail Sanderson for reviving the series and bringing it back to its original glory. Others go so far as to say he saved it from a terrible end it may have suffered from Robert Jordan.

The Wheel of Time is one of the most thoroughly built worlds in fantasy fiction, and one of the best-selling fantasy series ever written. More people would know of it if it were made into a TV show (which, by the way, would rock.) However, a fourteen book series with more than

one thousand pages each would simply take too long to make. So go out into the world. Find a Barnes and Noble and pick up The Eye of the World. The addiction begins there.