Trey Lance: the Next Lamar Jackson or Ryan Leaf 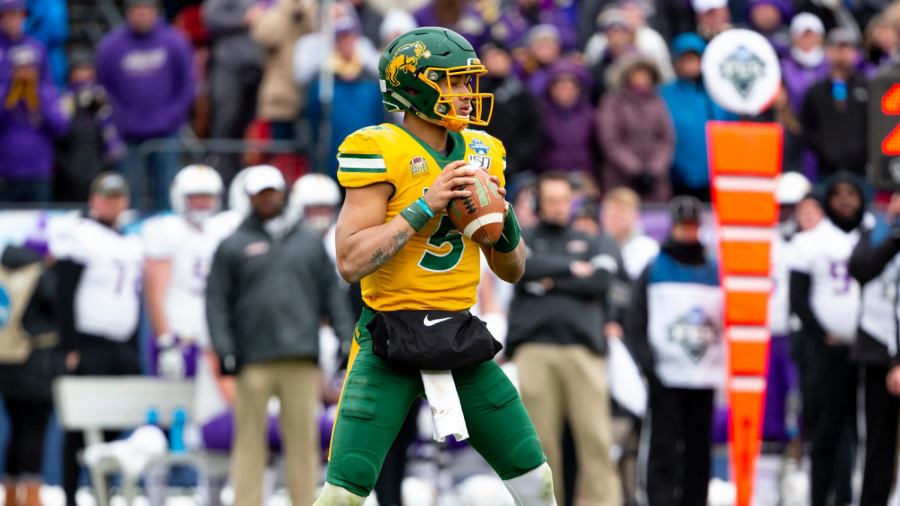 Trey Lance, the 20-year-old former North Dakota State quarterback, will be drafted in the 2021 NFL Draft. Even though he is young, Lance will be the target of many teams who draft in the first 15 picks like the Atlanta Falcons, San Francisco 49ers, and Denver Broncos. After most likely sitting for a year and learning from the starter quarterback of the team that drafts him, Lance will likely be the next and better Lamar Jackson.

However, Lance could just turn into another draft bust like Ryan Leaf.

Lance took the college football scene by storm in 2019 after throwing and rushing for a combined 42 touchdowns and a combined 3,886 yards with zero interceptions.

And sure, even though Lance did not play in the SEC, the hardest division in college football, he will be drafted to be the possible future of a team.

Because Lance is 6’4,’’ 226 pounds, and has the ability to throw and run, many teams will want to draft him because that is exactly what teams look for in a quarterback. Sure, Tom Brady is not a runner, and he is still an amazing player, but people like Patrick Mahomes and Lamar Jackson were drafted because they are quarterbacks who can run and pass, which seems to be the future of NFL quarterbacks.

Lance, on the other hand, has an already-established arm with his 2019 success and will therefore be a great addition to a high-powered offense with good receivers like the Falcons or Broncos. He would probably be a defense’s worst nightmare because he can throw the ball well, but he can also run masterfully. Defenses would have to try to stop both, landing Lance in the boom category of NFL draftees and making him an even better than Lamar Jackson.

Simon Bissitt, a junior at Pentucket Regional High School, believes that Lance can succeed in the NFL and be a boom if he “has a good o-line and one good receiver…who could be a tight end even.” If given the bare amount of talent, Lance may be able to be great and not be a draft bust.

Lance could start for a team in 2022 and be a rising star and achieve many great things like awards and be a better Lamar Jackson, or he could start in the 2021 season and fail. Timing is crucial in Lance’s success.

Since Lance is only just turning 21 in May, he may be immature and, if thrust into a team to be the starter in the 2021 NFL Season with young, terrible, undeveloped, and undisciplined players, he has a good chance of being a bust.

Ryan Leaf, the 2nd overall pick in the 1998 NFL Draft, proved to be a draft bust because of his attitude. After winning two games, his ego inflated, and then after playing a game that he should not have been in because of illness, he went 1-15 for four yards, two interceptions, and four fumbles. After the game, Leaf melted down after being asked a question by a reporter and gave a half-hearted apology later on with a paper statement on hand.

It was apparent that Leaf had issues with his personality that did not suit a starting NFL quarterback.

In addition, Leaf also partied in Las Vegas after being drafted, promised outrageous things like a super bowl for San Diego, and got drunk before his first day of training camp. He was only a year older than Lance, and he demonstrated the work ethic of a teenager/younger adult who has yet to be humbled.

If Lance gets drafted by a team that sits him to learn, he will probably have the opportunity of not becoming a draft bust because an ego and toxic personality will most likely be hammered away by older players on the team.

But, Lance could still be a draft bust because of his skills not transferring over to the NFL. Mark Dowling, my father, says that Lance and other college football players “play against boys in college, and when they play in the NFL, they play against men.” Lance could possibly lose his charm and perform poorly in the NFL after defenses figure out his playstyle, even though he may terrorize them at first.

In addition, Lance could be a draft bust because he has only had only a year of being the starting quarterback, which was back in 2019. He only had one completion, and eight rushing attempts in 2018 and only played one game in 2020 because the division in which he plays shut down due to COVID-19.

Lance’s lack of real playing experience may catapult him to the land of draft busts, or, it might be a sign for teams to sit him and play him in garbage time to develop him as a starting-caliber NFL quarterback.

No matter the fact that Lance could be a boom or bust, he has high potential and a high ceiling of becoming a superior dual-threat quarterback if he sits a year and gains experience, is humbled, learns from veterans, and has some type of talent around him.