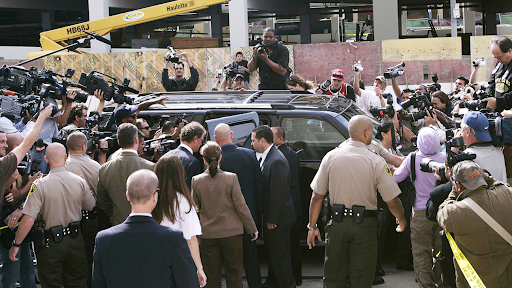 There’s no doubt that the intrusiveness of the paparazzi has always been a major issue amongst large Hollywood figures. Photographers are notorious for invading celebrities and their family’s privacy in order to get the “perfect” photo or video. The paparazzi have now created a hostile environment that makes it impossible for public figures to go out and simply be a normal person (which they are!).

So, how exactly do these people affect the lives of celebrities? Well, first off, let’s take a look at pre-modern times.

In the midst of the early 20th century, Hollywood stars were well respected and photographers did not have a bad reputation at this time. If you think of pictures of A-list celebrities back then such as Marilyn Monroe, Frank Sinatra, and Audrey Hepburn, their photos are staged or taken from a large and respectable distance. Photographers would not trespass on to their property, harass them, or follow them down the street which is normalized now as a part of celebrity culture.

It was not until around the 1960’s and 70’s that photographers started to live up to the negative connotation they have now. With “paparazzi” being a relatively new term then, celebrities were starting to experience the unfortunate downside of being famous: the lack of privacy.

One famous paparazzi scandal during the era of bell-bottoms and disco was the Jackie Kennedy nude scandal. The former first lady and widow to President John F. Kennedy had non consensual nude photos of her taken while on vacation, which were then published in an infamous men’s magazine called Hustlers.

As time progressed, photographers have only gone to more extreme lengths to capture photos of the rich and famous.

A notable example of this would be one of the most prominent paparazzi related headlines, leading to the tragic death of beloved Princess Diana of Wales. In the year 1997, Princess Diana was being driven home from a hotel, when they soon realized their limo was being chased by the paparazzi. This caused Diana’s driver to speed in order to escape them, ultimately causing a car crash.

While very few incidents have happened where someone is killed or physically injured, we have to think about the mental toll these people have on celebrities.

In 2007, Britney Spears had a very public mental breakdown due to the overbearingness of the paparazzi. As cameras flashed, Spears walked into a salon, asking for them to shave her head.

Spears was ridiculed, and soon after, she went to rehab and a mental hospital to get help.

Although celebrities have their fair share of issues with the paparazzi, they are not the only ones affected by it. This constant stalking also has a negative impact on their children.

According to www.harperbazaar.com, in an interview for Entertainment Tonight! actress Kristen Bell states, “Picture what it would be like walking down the street with your child, whether it’s trick or treating or just to school, and have 10 aggressive men taking their picture with a lens in your face, yelling, pushing other children outside of a school.”

At a young age, these children are especially traumatized by the people who are constantly asking their parents questions and taking pictures of them from afar.

George Clooney, an actor, also released a statement before, describing how “…photographers from Voici magazine scaled our fence, climbed our tree and illegally took pictures of our infants inside our home. Make no mistake, the photographers, the agency and the magazine will be prosecuted to the full extent of the law. The safety of our children demands it.”

It is simply to forget about the emotions of celebrities in our everyday lives. Some may say, “Well, they signed up for that” or, “They have it so easy.” However, this is not necessarily true.

While it is important to pass laws that are applicable to all people, we must think of children who were not given the option of having the spotlight and are constantly being watched and tormented.

The modern prodigy of paparazzi creates an unsafe environment for celebrities, their children, and the general public. With nobody except other upper class citizens to protect their interest, there is nothing stopping paparazzi from asking ridiculous questions and taking pictures.

In a time where the media is instantaneous, it is easy to forget about the right to privacy. Nonetheless, this is a basic human right that must be respected – even for celebrities.