A Major Upset for Emma Gannon and the Pentucket Art Showing 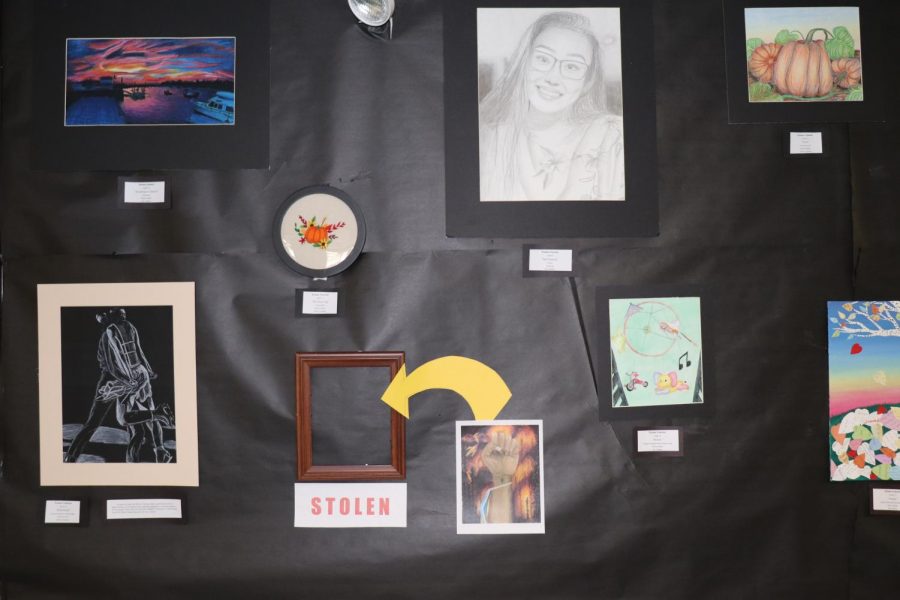 Senior Emma Gannon’s wall at the Senior Art Showcase seems off… Various pieces of her artwork were posted for all to see, however, there is one piece that had some modifications. Celebrating art and creativity has recently reached a controversial peak in the Pentucket halls as a piece of Gannon’s artwork has been involuntarily removed from the showcase.

As a part of the Senior Showcase, student artwork has been put up for display around Pentucket high school. Various paintings, drawings, and photographs are not only being hung for the viewing pleasure of the school but to recognize the stunning talents of Pentucket art students.

An announcement came on Thursday (5/12) afternoon, notifying staff and students that a piece of art has been stolen. Students let out gasps as they could not believe someone would have the audacity to take down and steal another’s hard work. News of a possible thievery has been circulating throughout the halls as everyone wants to know what could have possibly happened.

Gannon had a whole wall to herself to show off her amazing talents and creativity. She has created various works such as self-portraits and photos of friends, however, there was one piece that seemed a bit more controversial, and ended up going missing.

The drawing that Gannon created is titled, “Reflection,” which depicts a fist with a cross tattoo wearing a mask around it like a bracelet, as scenes of wildfires erupt in the background. This creation can definitely be taken in various controversial ways, as it represents many of the hot-button issues of the past year.

Gannon offers insight into her thoughts behind the happening, saying, “I think someone disagreed with what I was portraying, and they took it upon themselves to take it. I find it very disappointing that someone decided to take something I worked so hard on.”

The narrative that Gannon wrote to go with her picture reads:

“Recent events that took place over the past year inspired my artwork. There are 8 themes in art: The Sacred Realm, Politics and Social Order, Stories and History, Here and Now, Human Experience, Invention and Fantasy, The Natural World, and Art and Art. All art contains one or two if not all of the themes. I sought to incorporate all eight themes of art, and I think I did just that, but the piece is up for interpretation. Everyone saw these events differently, and I wanted to allow people to reflect on what has occurred.”

While we cannot directly say that someone stole the piece of art, many speculate that because of the piece’s possible controversial nature, someone with opposing views would have been likely to take it down. And this could very well be the case, but is it right to just take someone else’s work down just because you disagree with it? As much of a detective-style case this situation may seem, a possible thief’s motives and decisions reveal a deeper, moral battle being fought here.

All students have their right to freedom of expression and creativity, so many are upset that Gannon’s rights as an artist were violated as her art was lost. Many have considered what a punishment would look like in this situation, but it is hard to pinpoint what to do.

Pentucket art teacher, Marcia Nadeau, says that “Bottom line it is hard to say exactly what the punishment should be, but it should produce a positive impact in the future and give the artist a sense of closure. Confessing to a moment of weakness is far superior than having an investigation reveal you are a thief.”

Nadeau, adds that “We are all human, and no one is perfect, if you made a bad decision or you know who may have taken the work, you can help rectify this sad and senseless act… Emma deserves her work back and an answer to its disappearance.”

While some cannot comprehend the attachment that artists have to their work, and just how much of an impact this can have on a display, Gannon notes that “The missing piece made the board incomplete. Although I had many other strong pieces, there still was an empty hole. I made the joke with the frame because it’s similar to what the Isabella Gardner museum has in place of the art that was stolen there.”

While Gannon was able to find some humor in the situations, the bottom line is that no artist should ever be afraid of having their work stolen, just because someone did not agree with its message. Pentucket staff and students can only hope that Gannon’s artwork is found and returned, safely and intact.

Art is a malleable platform, where artists can choose to raise awareness for certain movements or messages, or they can simply just create something they think looks visually pleasing or “cool.” So, whether this artist meant to take a stand on a particular issue or not, many question the morality and respectfulness of the art thief. Does Pentucket want more justice for its artists, or will they stand to have people tearing down others’ ideas and dedicated creations?