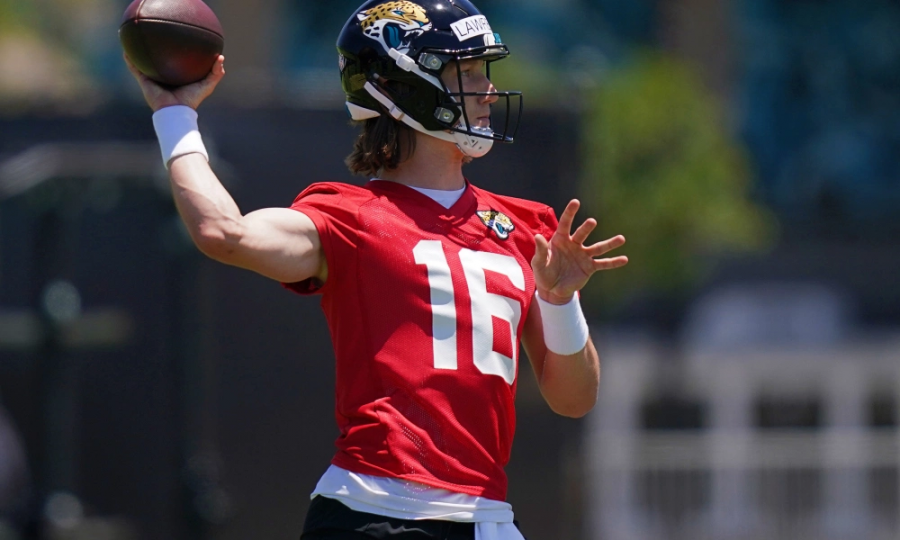 It is not a surprise that the Jaguars selected the best quarterback in the draft and the best quarterback prospect since Andrew Luck, to be the face of their future. Lawrence now joins Urban Meyer to play with running back James Robinson and wide receiver D.J. Chark. It is a grand slam pick because Lawrence is hyped up and has shown the skills like Peyton Manning and John Elway, two great quarterbacks, and that is why the Jaguars get an A+.

Another A+ for a quarterback. As the Jets traded Sam Darnold when thus needing a new quarterback for their new coach and system under Robert Saleh. Wilson joins mediocre receivers, excluding the second-round Ole Miss wide receiver Elijah Moore, but if he is supplied with good weapons and plays in the NFL to the same quality and level he did in college, he will be a great franchise quarterback.

Because of his arm and the team’s need for a quarterback, the Jets get an A+ for drafting Zach Wilson.

The 49ers get an A- for picking Lance because they passed on Justin Fields, who would have been an A+ option. Lance will not start this year because he is 21, compared to Fields, 22, and has only played one real season in the FCS Conference. While Lance has more potential to grow than Fields, passing on Fields, potentially the second Russel Wilson, was not the greatest choice, but Lance is still a solid choice for getting the 49ers to the Promise Land and for the future.

Drafting a young quarterback with a sky-high potential but passing on perhaps the second Russel Wilson results in this A- for the 49ers.

The Falcons got the most generational tight end in the 21st Century, but they only get a B+ because they could have taken someone else, a player like the Alabama Cornerback Patrick Surtain II or the Penn State Linebacker Micah Parsons for their atrocious defense. Instead, they added another amazing player to their already great offense. They also could have taken a quarterback like Justin Fields for use in the future.

Passing on Penei Sewell was a mistake but going after the generational Chase who played with Burrow at LSU is a clear case for the Bengals to receive a B+. They still got a player who will elevate their offense but they did not address the biggest needs when a generational offensive lineman was still on the draft board.

Waddle will fill this role and help either rebound Tua, after his mediocre rookie year, or show that he is a bust. Even though the Dolphins needed a wide receiver, Penei Sewell was still on the board, and they should have taken him to protect Tua because he is a generational O-lineman. Drafting Jaylen is an A grade because they landed but passed on a generation offensive lineman in Penei Sewell.

The Lions strike it out of the park with this pick. Landing Sewell after he fell instead of a quarterback like Mac Jones or Justin Fields for the future is a smart choice because they have Jared Goff still under contract. Sewell will immediately create a wall for Goff and run-game and protect the Lions’ quarterback of the future if it is not Goff.

The luck of landing the best available player after his draft stock fell is why the Lions nets the Lions an A++.

The Panthers passed on the best cornerback in the draft in Patrick Surtain II to land the second cornerback and third-best defensive player after Micah Parsons. The Panthers most likely drafted Horn instead of Surtain II because they had more film on him, as he went to college in South Carolina. The Panthers also passed on improving their line by passing on the Northwestern offensive tackle Rashawn Slater and adding another wide receiver in the Alabama Heisman-winning Devonta Smith just to reach for Horn.

In a couple of years, Horn might be better than the other cornerbacks in the draft, and the Panthers will look smart for taking him, but at the moment, they were stupid to pass on Surtian II and offensive tackle, Slater. Reaching for Horn over Surtain II, Slater, and Smith is why the Panthers get a C.

9. Denver Broncos- Patrick Surtain II: A+ if they trade for Aaron Rodgers / C if they do not trade for Rodgers

The Broncos already have a good secondary and picked up Ronald Darby and Kyle Fuller back in March. Surtain II is a great player and the best or second-best defensive player in the draft, but cornerbacks are not a need for the Broncos. While Surtain will be solid because he is the son of a former NFL Player, Patrick Surtian, and has had opportunities to learn more than other players, the Broncos should have drafted Justin Fields, who was still available, to help solve their murky quarterback issue and use for the future.

But, if the Broncos trade for Aaron Rodgers and include Surtain II in a trade package, the Broncos would get bumped to an A+ because they need a quarterback, as they have not had a great one since Peyton Manning retired, to compete and have a chance to make the playoffs. But if they do not trade for Rodgers and keep Surtain II, the Broncos stand with a C

The Eagles made the right decision to trade up with the Cowboys to get a necessity for their team. The Eagles have lacked a true wide receiver since falling from their 2018 Super Bowl-winning team. After passing on Justin Jefferson in the 2020 NFL Draft, who had a historic rookie season, the team could not afford to make the same mistake, and they did not.

Taking the Heisman-winner Smith to help Jalen Hurts breakout and make the offense stronger after passing on Justin Jefferson gives the Eagles GM Howie Roseman an unprecedented A+ after years of passing on talent.