Where Are You, “The Catcher in the Rye” Adaptation? 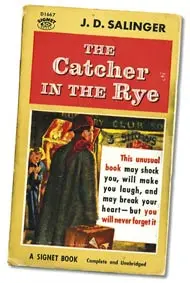 Even though it has been almost 70 years since its release, The Catcher in the Rye has not been adapted into anything in pop culture.

Many other American classics taught in English classes such as The Adventures of Huckleberry Finn, To Kill a Mockingbird, and The Great Gatsby have had adaptations, while The Catcher in the Rye is an outlier.

Even though there is a fair reason why The Catcher in the Rye has not been adapted into something in pop culture, as the Salinger Estate forbids it, are there possibly other reasons why?

Maybe it is the story, the character of Holden, or the themes that have held this film back from an adaptation.

Asking Ms. Carter, an English teacher at Pentucket Regional High School, her thoughts on this, she said that an adaptation of the Catcher in the Rye would actually be a good thing.

Even though the book is old, Carter does not think age holds an adaptation back. An example is The Scarlet Letter because it was written in 1850, and it was adapted into a film in 1995, 145 years later. An adaptation of The Catcher in the Rye could exist, even if people said it was written too long ago.

Also, I asked Carter if it would fare better as a play, miniseries, or short film, and she had interesting thoughts on it.

If it was adapted into a play, it might only elicit a certain group of people, and as Carter said, it “depends when it would be released and the hype.” If it was hyped up enough and released for an anniversary, more people would be prone to want to watch the play.

If it was adapted into a miniseries, “it would not get the author’s point across.” she explained.

However, Carter believes in the short film option because “it would be less controversial. You have to pick and choose what parts to put in.”

Although, Carter mentioned that the short film might be “blunt” because the book is also “blunt” as it handles Holden coming of age. She explained that the film topic can either “flop or succeed.”

Another issue she addressed was the character of Holden. Holden has come under fire lately as many people label him as a spoiled brat, but Carter says that Holden is fine but “to certain people, it will be like why and what do we get from watching this entitled character. And some will see Holden and learn about mental health and see how it could be handled.”

If Holden was written well, he would most likely be a great character, but if not, most people would avoid the adaptation.

So, according to Carter, if The Catcher in the Rye was able to be adapted into something rather than a book, it would work the best as a short film narrated by Holden, the main character, with a well-written story and well-written characters. Having it be a short film would make it less controversial but still blunt and packed with important messages, themes, and insights on a person coming of age.

But what do you think? Should there be an adaptation of The Catcher In The Rye if the Salinger Estate allows it, or should there not be?