Luck Charms Around the World 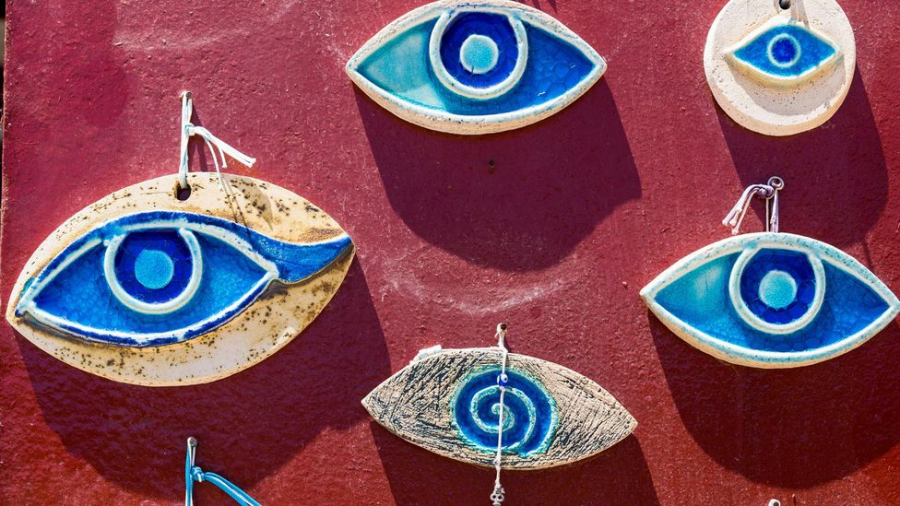 All throughout time and through cultures symbols of luck have been created. Even though they were originally created centuries or even thousands of years ago, they still hold importance to many today and have influenced social cultures today.

One of my personal favorites is the Evil Eye. The Evil Eye, also known as a nazar, originated in Greece in the sixth Century. It is now widely known in many cultures and in different countries, most specifically in the Middle East.

According to BBC, “the charm (is) meant to ward off the true evil eye: a curse transmitted through a malicious glare, usually one inspired by envy.” Though the amulet – often referred to as a nazar – has existed in various permutations for thousands of years, the curse which it repels is far older and more difficult to trace.

BBC also said that “it stems from the belief that someone who achieves great success or recognition also attracts the envy of those around them. That envy, in turn, manifests itself as a curse that will undo their good fortune.”

Similarly, the Hamsa is an amulet that is a palm with an eye in the middle that can be seen in many Middle Eastern cultures and holds many different meanings. In general, it is a protective talisman that brings good fortune, health, and happiness, and Jews, Christians, and Muslims in North Africa and the Middle East all use it.

Basically, every culture has the evil eye- like in ancient Greece it was Medusa and other Greek Gorgons, and in Irish folktales where men could bewitch horses with a stare.

Yet why is the eye always blue? According to BBC, the “Greek philosopher Plutarch, who in his Symposiacs suggested a scientific explanation: that the human eye had the power of releasing invisible rays of energy that were in some cases potent enough to kill children or small animals. What’s more, Plutarch claims that certain people possessed an even stronger ability to fascinate, citing groups of people to the south of the Black Sea as being uncannily proficient at bestowing the curse. More often than not, those said to be most adept at delivering the curse are blue-eyed, likely due to the fact that this is a genetic rarity in the Mediterranean area.”

On the back of the dollar bill, one can find the Eye of Providence, used by Freemason and symbolizes God’s omniscience.

It is quite popular in fashion and many celebrities have been seen wearing them.

Lorraine Schwartz has a collection called Against The Evil Eye that has been popular for over two decades.

Not only do celebrities wear this symbol, but it can be seen adapted in various other places. Such as in the Lord of The Rings where Lord Sauron is an eye that has the land of the Lord Of The Rings in his gaze.

According to wellandgood, Jade is known to be good luck in Asian culture. It is often used to make statues in feng shui and babies are given jade when they are born. It is thought to have protective and lucky charm energy.

Jade also symbolizes balance and harmony in any form like in relationships, calming the mind, and balancing the body. Jade is also thought of to help a person see the possibilities around them and make them rich.

While many use red in fashion to make a staple or statement- such as red lipstick or high heels, red is a very important color in Chinese culture. Red signifies fire but also happiness, beauty, vitality, good luck, success, and good fortune.

Red is used a lot during festivals and brides wear it at their weddings and it is used in weddings as well. Businesses and houses often have red lanterns hanging outside and red envelopes are used to give money for Chinese New Year.

One version of beliefs is that as red symbolizes fire, it wards off evil.

We use red all across the world during special occasions even when something simple like when dressing. For the Oscars, the carpet is called and is the red carpet.

Long before Hitler used the Swastikas during his regime, they were used for over 5,000 years in many different cultures.

Swastikas were used as “a symbol of well-being in ancient societies including those in India, China, Africa, native America, and Europe”  according to the United States Holocaust Memorial Museum.

The United States Holocaust Memorial Museum also says that the swastika is derived from the “Sanskrit svastika, which means ‘good fortune’ or ‘well-being.’ The motif (a hooked cross) appears to have first been used in Eurasia, as early as 7000 years ago, perhaps representing the movement of the sun through the sky.”

Today, it is still a sacred symbol to cultures like Hinduism, Buddhism, Jainism, and Odinism. You can easily find swastikas on temples or houses in India and Indonesia. They even appear in artifacts from pre-Christian European cultures.

Before Hitler used the symbol, it was used in marketing in the Western Hemisphere, including here in the US. According to BBC, Coca-Cola used the symbol on their coke bottles and Carlsberg used it on their beer bottles.

Not only was the symbol used by corporate companies, but the Boy Scouts and Girls’ Club of America named their magazine Swastika. BBC states that “They would even send out swastika badges to their young readers as a prize for selling copies of the magazine.”

Finally, swastikas were used by the American military in World War I. They were put on RAF planes and could be seen as late as 1939 yet were stopped in the 1930s when Nazis began to rise to power.

It is unfortunate that a sign of good luck and an important part of many cultures was made into an ugly thing because of a terrible time in history led by a terrible man.

There are so many items out there that symbolize luck that has stuck with us through the centuries and have played roles in today’s culture.