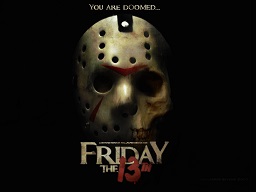 As many prepare for the most joyful season of the year, others are dreading a day that rarely brings good tidings and cheer, Friday the 13th.

Whether it’s crossing fingers, knocking on wood, or carrying around a lucky horseshoe, superstitious students at Pentucket are trying everything in their power not to feel the wrath of the historically unlucky day.

Thirteen has been an ill-fated number since biblical times.  Not only was Judas, the disciple who betrayed Jesus, the thirteenth guest at the Last Supper, but Jesus is also to be said to have died on a Friday.

Although modern myths and superstitions are said to have been based on such unfortunate events, Sophomore Hannah Knittle believes, “Thirteen is a number people dislike because it is and odd number.”

Freshman Joe Winslow, on the other hand, believes horror movies, rumors, and coincidences have caused many people to develop trisdekaphobia, the irrational fear of the number thirteen.

President Franklin D. Roosevelt was one of the many Americans that suffer from triskdekaphobia.  Roosevelt would never invite a thirteenth guest to a dinner party and refused to travel on Friday the 13th.

Proof that people continue to live with similar fears is evident in America’s economy.  The twenty-one million people who suffer from triskdekaphobia cause businesses, especially airlines, to lose an estimated $800 to $900 million dollars on Friday the 13th.  This myth also causes people to refrain from buying houses or investing in stock.

Such fears have also caused over 80% of skyscrapers to be built without a thirteenth floor.  Airports also skip the thirteenth gate while airplanes occasionally leave out the thirteenth aisle.  Even hospital rooms are sometimes assigned without a room thirteen and the thirteenth chair lift is entirely missing at some ski resorts.

Sophomore Sarah Stewart, who describes herself as “very superstitious,” does not have any specific superstitions related to Friday the 13th but admits, “Stepping on cracks makes me nervous.”  In addition to her fear of walking under ladders and breaking mirrors, Sarah is also “scared of elevators.”

Knittle also believed in the “step on a crack and you’ll break your mother’s back” superstition in elementary school saying, “I took that one seriously.”

Winslow however, like Roosevelt, is “superstitious about transportation.”  When traveling, Winslow shares that he silently prays to himself as a good luck ritual.  “After all the crashes and hijackings, you never know what’s going to happen,” he says.

Like Winslow, Stewart also has some good luck superstitions.  “I knock on wood and cross my fingers,” she says of when she is hoping for something good to happen.  She also has a more sentimental belief that picking up a dime whenever she finds one will bring her good fortune.  “My mom’s mother passed away and ever since, dimes have represented her and good luck.”

Luck is something Knittle might need for the next time Friday the 13th appears on the calendar.  “Once I was almost in a car accident,” she says of one Friday the 13th experience where she also lost power in addition to witnessing a small explosion outside of her house.

However, Knittle is more excited than afraid of the typically frightening day saying, “I think it’s cool.  I want to see what happens in school, like if the power goes out or something.”

Unlike Knittle, Sophomore Jillian Terry could not recall any strange Friday the 13th happenings and admits that she is not very superstitious.

Afterall, thirteen is just a number.  World famous country music star, Taylor Swift, even marks the number thirteen on her hand before every performance to symbolize her favorite and, ironically, “lucky” number.

Winslow however, greatly fears all aspects of Friday the 13th saying, “I’ve watched a lot of Jason movies, enough to know that when you hear a chainsaw, you run.”

Although it may seem foolish to put so much emphasis and stress on one day and one number, many strange events have taken place on Friday the 13th leading people to believe its many theories and conspiracies.