All Star vs. Varsity Cheerleading: What’s the Difference? 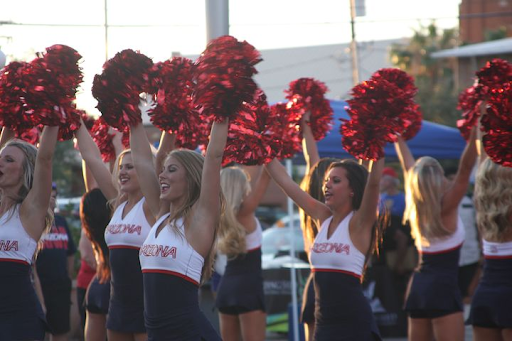 “Cheer isn’t a sport,” said just about every person ever. However, is it possible that these people are both right and wrong at the same time? This debate can have very different opinions from many different people.

Being both a varsity and all-star cheerleader, I must admit that if I didn’t know any better and saw some people waving around pom-poms and yelling “go team”, I wouldn’t call it a sport either.

Varsity/high School style cheerleading is just how one would imagine it, cheering for a sports team. Some high school teams will also go to small local competitions where they compete against other high school teams.

All-star cheerleading, on the other hand, is a much more competitive and demanding atmosphere. These teams do not cheer for anyone and spend the entire year perfecting a two-and-a-half-minute routine made up of tumbling, stunting, dancing, and jumping that they will compete with at major competitions across the country.

When it comes to routine difficulty, it can all depend on different things.

It is not surprising how many people do not know that cheerleading even exists outside of football sidelines. I think we can all agree that yelling cheers and doing some motions on the sidelines doesn’t require as much athleticism as many other sports which is what fuels the debate.

However, competitive style cheerleading (which can include high school teams that compete) is a mix of tumbling, stunting, jumping, and dancing. This requires one to have stamina, strength, balance, and muscular endurance.  With this type of athleticism and competitive atmosphere, I believe that this form of cheerleading is absolutely a sport.